Since 1995, the use of alcohol hand sanitizer has increased in the healthcare field as well as the general public. 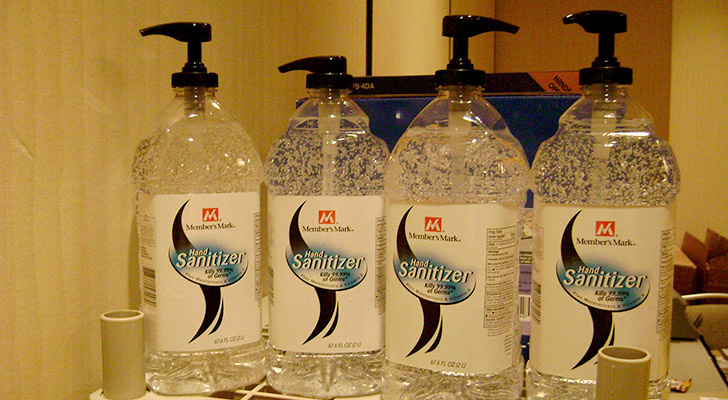 Use of an alcohol sanitizer is convenient. You can transport bottles in your pocket, purse, car or simply keep a small amount at a workstation or desk. Water and a sink are not always immediately available–including in a classroom setting or at a public sporting event. Avoid the trouble of finding a sink and washing hands or waiting in long lines in the restroom by simply carrying a small portion of sanitizer with you. The CDC recommends cleaning hands before and after eating, when preparing food or when hands are potentially contaminated with bodily fluids.

Applying hand sanitizer takes less time than washing with antimicrobial soap. Using a hand sanitizer takes about 15 seconds, according to the website Dr. Green. Washing hands takes much longer–you must scrub your hands with water and soap for a minimum of 20 seconds and then dry them.

Using an alcohol-based sanitizer is more effective in reducing the spread of rotavirus, adenovirus and rhinovirus compared with medicated and non-medicated hand soaps according to studies cited by the CDC. Sanitizers studied included those with 70 percent alcohol. Pathogens, such as gram-negative bacilli, were less likely to transfer from patients when healthcare workers used hand sanitizers instead of regular hand washing.

The CDC recommends using alcohol-based hand sanitizer both before and after preparing and eating food, tending to someone who is ill, and treating a wound. Use hand sanitizer after using the toilet or handling dirty diapers, blowing your nose, coughing or sneezing, handling an animal, and handling the garbage. Frequently use hand sanitizer during the contagious period of any illness. Apply enough hand sanitizer to wet both hands and then rub your hands together for 20 seconds or until the hand sanitizer dries.

Ethanol-based hand sanitizer can kill the most common cause of the common cold–rhinovirus. Rhinovirus, which is highly contagious, spreads from droplets in the air and from hand-to-hand contact through objects and people. Symptoms of the common cold typically last a week and include runny nose, sore throat, cough congestion, sneezing, body aches, fatigue and a low-grade fever, according to MayoClinic.com. A 2009 study by the Department of Pediatrics at University of Virginia School of Medicine found ethanol-based hand sanitizer more effective than soap and water for killing rhinovirus. The hand sanitizer removed detectable virus from at least 80 percent of hands in the study.

Norovirus and rotavirus, the two strains of what’s commonly called the stomach flu, can be killed by alcohol-based hand sanitizer, explains MayoClinic.com internist Dr. James M. Steckelberg. Watery diarrhea, abdominal cramps, nausea, vomiting and fever are common stomach flu symptoms. With norovirus, you are contagious from the moment you feel ill until at least 3 days after you’ve recovered. You’re contagious with rotavirus before you develop symptoms and you stay contagious for two weeks after you’ve recovered.

When soap and water are not available, the CDC recommends alcohol-based hand sanitizer to help prevent the spread of the “swine flu,” also known as the H1N1 virus. The H1N1 virus causes fever, cough, sore throat, runny or stuffy nose, body aches, headache, chills and fatigue and may result in death, according to the CDC. The virus is contagious from 1 day before symptoms occur through 5 to 7 days after getting sick

The bird flu, also known as the avian influenza virus, is rare, but very dangerous in humans. More than half of people who become infected with the virus will die, according to MayoClinic.com. Bird flu symptoms mirror the conventional flu and include cough, sore throat, muscle aches and fever. Humans become infected with bird flu through contact with an infected bird’s feces or secretions. The Department of Veterinary Population Medicine at the University of Minnesota concluded that alcohol-based hand sanitizer kills the virus with one application on the hands.